This post contains information about Unreal Build Tool, the Unreal Engine 4 build system. Most of the information you need to know can be found in the links below to Epic’s official documentation. The notes here shed light on aspects that are less documented.

Unreal Build Tool (UBT) reads C# .build.cs and .target.cs files as input to describe what to build. As part of the build process, these C# files are actually themselves compiled into a Rules assembly (a shared library). This 3 steps process of build.cs > Rules assembly > build has an extra step than more common build system like make which goes from Makefile > build.

The compiled Rule assembly for the engine is:

The compiled Rule assembly for your game is:

Build systems like UBT that rely on timestamps can have problems when files are copied from machine to machine when the timestamp is preserved. I recently ran into a problem with HoudiniEngine plugin for UE4 that went like this:

I reported this bug, in particular, to Side FX, but it’s a general weakness with UBT, or any build system that relies on filesystem timestamps to invalidate caches. Side FX will have to do something like update the timestamp of the build.cs file after copying it into the UE4 directory in order to force a UE4Rules re-build.

If you’re building the engine from source and you want to work on your machine while this is going on, you may want to limit the number of compilation processes on your system. This is done by modifying BuildConfiguration.xml, which should be placed in Engine\Saved\UnrealBuildTool\BuildConfiguration.xml.

Here is the BuildConfiguration.xml I used to limit the number of processes:

Epic’s Setting Up Visual Studio for Unreal Engine guide covers most of what you need to know, but if you are compiling the engine from source you also need one additional setting: you must limit the maximum number of parallel project builds to 1. When using UBT, UBT is responsible for parallel builds, not Visual Studio. If you allow Visual Studio to do parallel project builds then you will be spawning multiple instances of UBT, which leads to problems like logs files being written concurrently by two separate processes.

To limit Visual Studio, go to Main Menu > Tools > Options, and then set maximum number of parallel project builds to 1. 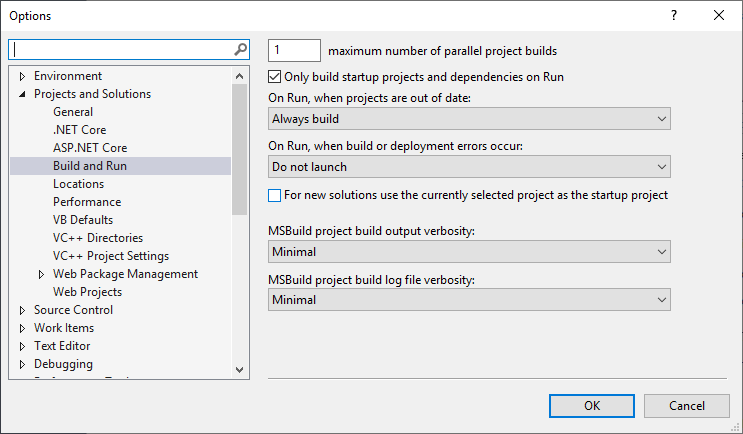